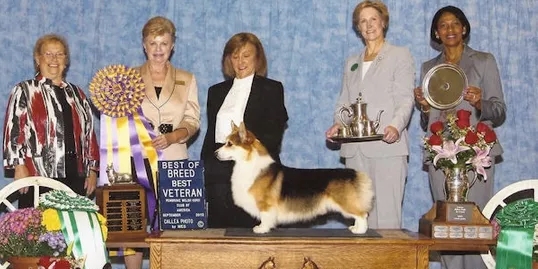 “Herman” obtained his AKC Championship in five undefeated shows. Once a Champion he was exhibited only seven times, all seven of those at specialties.  He was awarded five specialty Best of Breeds  and two Awards of Merit. His final time in the ring was at the 2012 Pembroke  Welsh Corgi Club of America National where he was shown in the 10 year and over Veterans class. He is pictured with judge Terry Hansen (Pinemeade) who did him the ultimate honor when she awarded him Best of Breed.